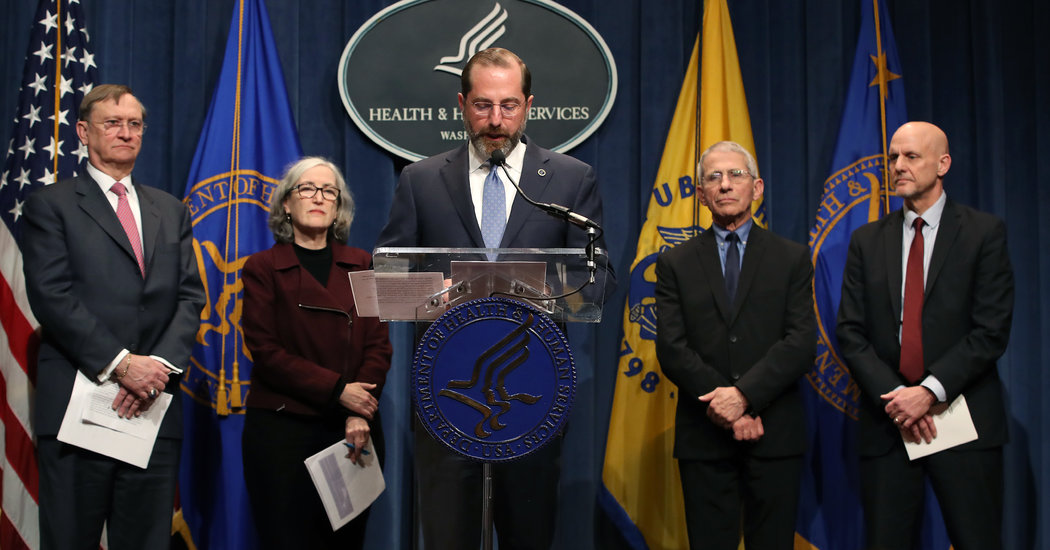 Want this in your inbox each morning? Sign up here.

Another day, another bracing warning from health officials about the coronavirus. Yesterday, the Centers for Disease Control and Prevention said that Americans should prepare for a wider outbreak in the U.S., leading to another severe sell-off in markets.

It’s a matter of when, not if, the coronavirus will spread, said Nancy Messonnier, the director of the C.D.C.’s National Center for Immunization and Respiratory Diseases. “We are asking the American public to prepare for the expectation that this might be bad,” she said. “Disruption to everyday life might be severe.”

Officials are preparing to shield the economy, with the Federal Reserve vice chair Richard Clarida warning that the disruptions now centered in China “could spill over to the rest of the global economy.” He said it was too soon to speculate about the potential effects of the outbreak, suggesting that the Fed is not yet prepared to act.

• Traders, however, are betting that the Fed will cut rates sooner rather than later, with futures markets implying a 30 percent chance of a cut at the central bank’s meeting in March, 60 percent in April and near certainty that benchmark rates will be lower by the summer.

The White House has offered mixed messages, and the WaPo reported that President Trump is angry about the stock market’s slide after the C.D.C.’s warning.

• Alex Azar, the health and human services secretary: “We cannot hermetically seal off the United States to a virus, and we need to be realistic about that.”

• Larry Kudlow, the White House’s top economic adviser: “We have contained this. I won’t say airtight, but pretty close to airtight.”

It’s looking like another rocky day in the markets, with Asian and European stocks in the red and U.S. futures bouncing around without a clear direction. Mohamed El-Erian of Allianz doesn’t think it’s wise to “buy the dip” just yet, but as more companies tell employees to stay home, the share price of the videoconferencing company Zoom has gained 5 percent over the past two days.

The Democratic debate descends into chaos

Last night’s debate was an “unsightly spectacle of flailing hands and raised voices,” reports the NYT’s team in Charleston, S.C. It was the last onstage clash between candidates before this weekend’s primary in the state and the “Super Tuesday” delegate bonanza next week.

Bernie Sanders took the most heat, with rivals to the front-runner in national polls wasting no time taking shots at the Vermont senator. The NYT’s Matt Flegenheimer and Sydney Ember captured the scene in their post-debate analysis:

He was never surprised, never entirely smooth and, when it was done, not necessarily looking any less the favorite than he did going in.

Yet as Mr. Sanders moves to expand and consolidate his hold on the Democratic primary, he at once reinforced the reservations that many in the party still have about him and laid bare the power and peril of his politics: his own unyielding worldview — and just how unlikely he is to adapt it to anyone else’s definition of electability.

Mike Bloomberg tried to recover from his patchy debate debut last week, fielding more awkward questions about his treatment of women and his use of nondisclosure agreements. On the afternoon before the debate, Bloomberg L.P. sent a memo to employees announcing new measures to bolster the company’s policies against harassment and discrimination.

The bottom line: Prediction markets think Joe Biden is a heavy favorite to win the South Carolina primary, but Mr. Sanders remains well ahead of the pack for the nomination.

Bob steps down, and Bob steps up

The Disney C.E.O. Bob Iger created a major plot twist yesterday when he announced that he would immediately step down after 15 years and become executive chairman focused on the company’s creative operations. Hollywood and Wall Street aren’t sure what to make of the news.

His chosen successor as C.E.O., Bob Chapek, was a surprise. Mr. Chapek is a Disney veteran who currently oversees the company’s theme park empire. He’s not as charismatic as Mr. Iger, but he is steeped in Disney’s culture and operations. Analysts appeared to support the choice: “Chapek is a really good, no-brainer pick,” the analyst Michael Nathanson told Brooks Barnes of the NYT.

Mr. Iger leaves big shoes to fill. As C.E.O., he struck four transformative acquisitions that turned Disney into a media colossus: Pixar, Marvel, Lucasfilm and most of 21st Century Fox. During his tenure, Disney’s market cap gained about $175 billion.

Mr. Iger is still the boss, since Mr. Chapek will report to him until the end of next year. Mr. Iger isn’t taking a pay cut, so, as Felix Salmon of Axios points out, “Now Disney has two men named Bob making C.E.O. salary.” The suddenness of the move has many media watchers speculating about whether any big shoes will drop. And Mr. Iger’s previous flirtations with a presidential run add intrigue to the move.

The inside dish: Many thought Kevin Mayer, Mr. Iger’s M.&A. lieutenant who oversees the Disney Plus streaming service, was the heir apparent. The question now is whether Mr. Mayer will bolt given that he appears to have lost the succession contest.

Tesla’s Autopilot was probably at fault in fatal crash

After a long-running investigation into a 2018 crash in California in which the driver died, the National Transportation Safety Board adopted several findings and recommendations at a hearing yesterday in Washington.

It’s grim for Tesla, the NYT’s Niraj Chokshi reports, with the federal safety agency concluding that Autopilot failed to keep the driver’s vehicle in the lane, that its collision-avoidance software failed to detect a highway barrier, and that the driver was most likely distracted by a game on his phone.

“It’s time to stop enabling drivers in any partially automated vehicle to pretend that they have driverless cars,” said the N.T.S.B. chairman, Robert Sumwalt. His agency and others are investigating more than a dozen crashes in which Autopilot might have played a role.

JPMorgan will get ‘creative’ with acquisitions

At the bank’s investor day in New York, Jamie Dimon said he would now pursue deals more aggressively, thanks to a more accommodating attitude from regulators on the size of banks.

“They’re giving more of a green light,” Mr. Dimon said. “When it comes to M&A, we should be very, very creative,” he added, citing increased competition from tech firms like Alipay, Apple, Amazon, Facebook, Google and WeChat. Morgan Stanley’s takeover bid for E-Trade last week also supported the notion that banks think post-crisis caution among the authorities won’t be as much of a hurdle to deal making as it has been in the recent past.

Buying another bank probably wouldn’t pass muster, Mr. Dimon suggested, but his comments are sure to encourage pitches from fintech upstarts looking to be bought by America’s largest bank.

• A new rule from the National Labor Relations Board scales back the responsibility of parent companies for violations by franchisees or contractors. (NYT)

• Kids these days: A top official in the White House’s personnel office is a college senior. (Politico)

• Keith Block has stepped down as co-C.E.O. of Salesforce after 18 months, leaving Marc Benioff as the software company’s sole leader. (WSJ)

• How Washington fell into disarray over 5G. (Politico)

• What happened to the students in the college admissions cheating scandal? (NYT)

• A big shake-up among European bank bosses is underway, but boards say there is a shallow pool of candidates to choose from. (FT)