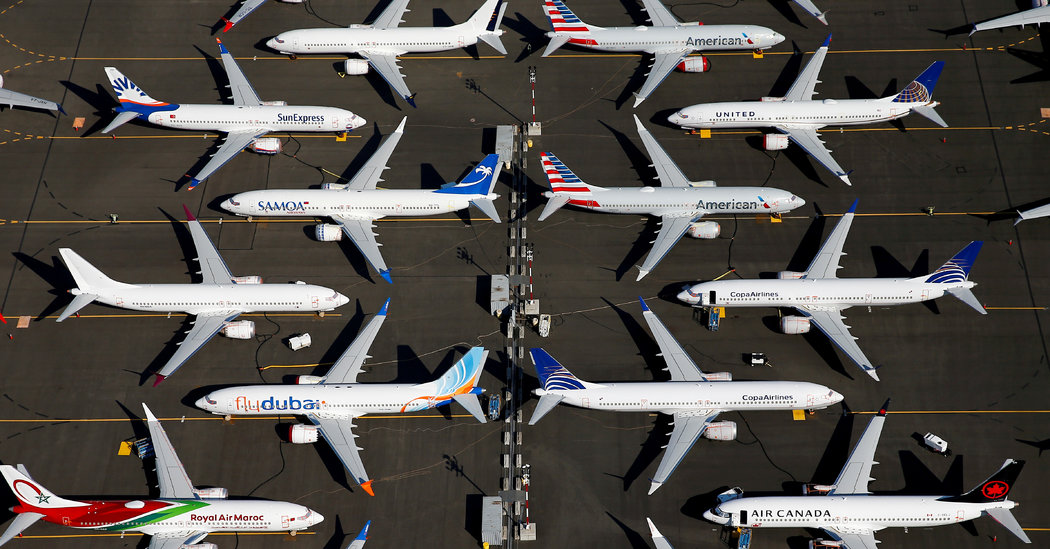 The Federal Aviation Administration recommended on Friday that Boeing be fined nearly $20 million for installing equipment in the 737 Max and other aircraft before its approval.

The announcement came hours after Democrats on the House Transportation Committee slammed both the company and the agency for failing to ensure the safety of the Max jets. Two of the planes crashed in 2018 and 2019, killing 346 people and leading to the model’s worldwide grounding.

The F.A.A. accused Boeing of installing the equipment, the Head-Up Guidance System from Rockwell Collins, on nearly 800 jetliners from June 2015 to April 2019. The systems included sensors that had not been tested or approved when they were installed, though Rockwell Collins later conducted the necessary testing and risk analysis, the agency said in a statement.

In response, Boeing noted that the proposed $19.68 million fine did not involve a safety issue and said a review had found that the systems “met or exceeded” the original requirements.

“We understand the critical importance of compliance with all documentation requirements of the F.A.A.’s certifications,” the company said. “We are committed to doing better.”

The agency accused Boeing of installing the systems in 618 Boeing 737 NGs and 173 Max planes. Boeing has 30 days to respond to the recommendation. Typically, the final details of such penalties are worked out in legal negotiations between the agency and the offending party.

The F.A.A. proposed a $5.4 million fine in January after it accused Boeing of installing substandard components in the Max and other aircraft. That fine has not yet been made final.

Earlier in the day, the House Transportation Committee’s Democratic majority issued preliminary findings from a yearlong investigation into the Max disasters. The majority staff accused Boeing of overlooking safety in the interest of meeting production goals, making misguided assumptions about flight-control software known as MCAS and hiding information from the F.A.A., the public and Boeing customers, among other things. The report also accused F.A.A. management of yielding to Boeing’s influence and rejecting the safety concerns of its own experts.

“Our committee’s investigation will continue for the foreseeable future, as there are a number of leads we continue to chase down to better understand how the system failed so horribly,” the committee’s Democratic chairman, Representative Peter DeFazio of Oregon, said in a statement.

The Democrats also argued that Congress should change the F.A.A.’s aircraft certification process. The committee’s Republican minority agreed that there were problems with the process and said it was open to bipartisan legislation, but dismissed the idea that the system was “broken or in need of wholesale dismantlement.”

The report was released just before the March 10 anniversary of the crash of a Max jet, Ethiopian Airlines Flight 302, that killed all 157 people on board.

“We have cooperated extensively for the past year with the committee’s investigation,” Boeing said in a statement about the findings. “We will review this preliminary report.”

Also on Friday, David L. Calhoun, Boeing’s chief executive, emailed senior leaders at the company to apologize for remarks he made in a New York Times article published on Thursday.

In the interview, Mr. Calhoun sharply criticized Boeing’s former chief executive, Dennis Muilenburg, saying he ramped up production rates before the supply chain was ready and angered regulators with overly optimistic projections about the return of the 737 Max.

“I am both embarrassed and regretful about the article,” Mr. Calhoun wrote in the email. “It suggests I broke my promise to former CEO Dennis Muilenburg, the executive team and our people that I would have their back when it counted most. I want to reassure you that my promise remains intact.”

Mr. Calhoun, who was on Boeing’s board for the duration of Mr. Muilenburg’s tenure as chief executive, sought to soften his criticism of his predecessor. He added that he did the interview “in the interest of demonstrating transparency and straight talk about our leadership point of view and current situation.”