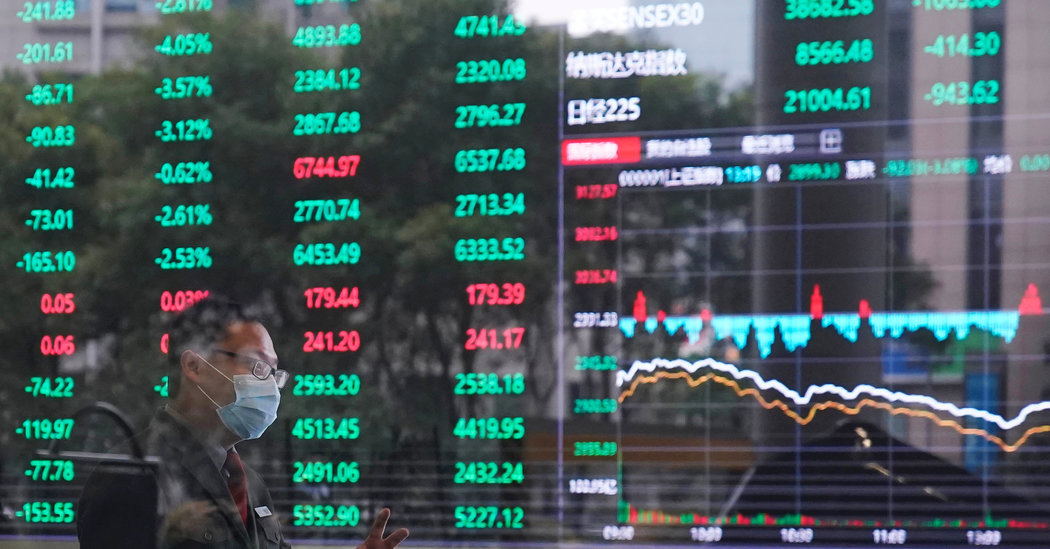 Federal Reserve officials and their global counterparts are staring down an economic threat unlike any they have ever faced, as markets look to them to contain the fallout from a rapidly spreading virus with limited ammunition and tools ill-suited to deal with broken supply chains and quarantined consumers.

No playbook exists for dealing with the economic threat posed by the coronavirus, which has already shuttered factories and impaired companies across the globe.

The outbreak has sickened more than 85,000 people and has been spreading rapidly outside of China, where it first surfaced. Japan, South Korea, Iran and Italy are all battling major outbreaks, in many cases imposing quarantines to contain the spread. That has disrupted supply chains, forcing companies like Apple and Toyota to idle factories in China and grounding airlines as consumers stayed home, sending stock prices plunging.

In the best case scenario, the virus is quickly contained and the global economy suffers a hiccup. The American economy is in its 11th year of an expansion, and many economists believe that the underlying fundamentals remain strong and that growth will continue, helping to insulate the United States from a big shock.

Investors are not so sanguine. Stock markets bled through their worst week since 2008, with the S&P 500 index falling 11.5 percent amid worries that the outbreak could become a worldwide pandemic. Should that happen, the Fed and other central bankers are poised to respond. The Fed chair, Jerome H. Powell, issued a rare statement on Friday saying that policymakers would “act as appropriate” to support the economy, which investors and analysts took as a sign that officials would cut rates at their March meeting, if not earlier.

But lowering borrowing costs will only get the global economy so far: Rates are historically low across advanced economies. They are already negative across Europe and Japan, where infections are rapidly mounting. Officials in those economies had already been trying to coax households and businesses to spend amid lackluster growth by purchasing huge quantities of bonds.

And it is unclear whether monetary policy is the ammunition needed to fight this particular type of economic threat, at least at the outset. Policymakers cut rates to ward off an economic downturn — or contain one that has already arrived — by making it cheaper to borrow money, assuming that will help prod the economy. That’s what the Fed did in the financial crisis in 2008, when it lowered rates to near zero and bought government-backed bonds in an attempt to stoke lending, pushing businesses and consumers to resume investing and buying.

But a rate cut can do little to restart production lines hobbled by workers placed in quarantine or told to stay home. Nor can central banks do much to lure tourists back to Venice or encourage people to fly again. And because monetary policy works slowly — a rate cut today takes more than a year to fully filter through the economy — it is better suited to dealing with protracted slumps.

“We would rather have a vaccine than a rate cut and fully recognize that monetary policy is not optimized for addressing this type of shock,” Krishna Guha and Ernie Tedeschi of Evercore ISI wrote in a note to clients.

America’s economy is susceptible to the threat posed by coronavirus, given that growth has largely been powered by consumer spending. Long-lasting quarantines could keep shoppers at home while fear of infection could prevent even those not quarantined from venturing out. The shock might be particularly dire for small businesses that do not have big cash cushions: A few weeks of depressed sales can push them to the edge of ruin. And if companies close or downsize and jobs are lost, consumer spending would suffer even more.

Florian Hense, an economist at the German bank Berenberg, said central bankers can at best mitigate the economic impact, not contain it.

“You can’t bring people back to factories. How are you going to convince consumers to leave their houses and buy goods?” Mr. Hense said.

Despite those shortcomings, economists say that pre-emptive action might still be of some help. Rate cuts — or even hints that they are coming — can help calm markets and keep credit flowing. If it seems that the coronavirus is going to have longer-lasting effects on consumer and business spending, lower borrowing costs can offer some reprieve by stoking demand.

“I think it would send a huge signal if the Fed was willing to cut rates, even a quarter of a point, on an inter-meeting basis,” Narayana Kocherlakota, formerly president of the Federal Reserve Bank of Minneapolis, said Friday. And coordinating statements with other global central banks could help, he said. “This is obviously a global shock, so it’s reasonable to think about a global response.”

The United States’s central bank is in a better starting position than many of its peers. It managed to lift rates amid a stronger recovery, and borrowing costs are now set in a range of 1.5 to 1.75 percent. But it too has far less room to cut than before the Great Recession, when it slashed rates to near zero from above 5 percent.

Markets are betting that officials will make a full percentage point in rate cuts by the end of the year.

But in many places, monetary policy has less room to work.

China’s central bank has already lowered its key interest rate, and the government’s tight control means that it can pump a lot of money into the economy quickly. But Beijing has been doing just that ever since the global financial crisis, producing an ever-rising mountain of debt that could grow even taller as the authorities force banks to respond to the current difficulties.

The Bank of Japan has few options left when it comes to juicing growth, though its governor, Haruhiko Kuroda, has said it stands ready to act as needed. Its already-negative interest rates mean it is more expensive for Japanese banks to stow money away than to lend it to businesses, but banks can have a hard time finding places to lend.

And in South Korea, where rates are low but positive, the central bank surprised investors by leaving interest rates unchanged on Thursday even as the country struggles with the largest known coronavirus outbreak outside China.

Because no one knows how bad the epidemic will get, it is unclear how much stimulus will be needed — which is part of the reason this is such uncertain territory for the Fed and other central banks. If contained quickly, the coronavirus could deal a short-term blow to growth and economies could quickly snap back. But the chances of a painful slump are rising as the virus spreads.

Forecasters have cut economic growth estimates in the United States and globally, though the projections vary widely as economists struggle to predict the virus’s trajectory and the resulting damage. Bank of America researchers reduced their forecast for 2020 growth in the United States by 0.1 percent on Friday, to 1.6 percent overall.

Moody’s Analytics said this week that the odds of a recession had risen to 4 in 10. Capital Economics pegged it much lower, at 1 in 10.

There is a risk that conditions could devolve if the virus spreads more quickly than expected. There is a growing consensus among economists that Europe is already headed into a recession and that weakness is likely to spread, hampering growth in the United States as well.

Other vulnerabilities also exist. As in the 2008 crisis, financial risks threaten to aggravate any growth slump that materializes. Corporations owed $13.5 trillion to bond holders at the end of 2019, an all-time high. Half of the corporate bonds issued last year were rated just one notch above junk. If debt-laden companies fail to keep up with payments amid supply chain shutdowns and work closings, they could default, handing big losses to the investors backing the loans and rippling through the financial system in unexpected ways.

Markets are already wary about such a possibility. Investors are pulling money from funds that track loans to highly indebted companies and those with low credit ratings — running away from the type of debt that usually fails first when companies run into trouble.

“There are plenty of risks in terms of financial stability, and also a lot of geopolitical risks,” said Lorenzo Codogno, former chief economist for the Italian Treasury, who is now an independent consultant in London. “The situation is intrinsically fragile. In my view, the coronavirus could be the tipping point.”

The fallout could present the first significant test of the defenses central bankers and regulatory authorities erected around the financial system after the 2008 meltdown plunged their economies into the abyss.

It should help that the system is stronger now than it was more than decade ago. Bank capital levels are much higher, meaning big banks that nearly toppled in 2008 can withstand major losses. And so far, there are no signs of the sort of funding pressures and cash crunches that defined the financial crisis.

The Fed has other tools at its disposal should the financial system run into trouble: It can keep dollars flowing internationally and provide loans to banks through the so-called discount window, which can help to relieve any short-term shortage of funds among commercial banks.

Because monetary officials in Europe and parts of Asia are short on tools to combat a potential crisis, the pressure is on governments to act instead. Central banks have urged their elected counterparts for years to move more decisively to prop up growth.

China has announced measures including tax cuts for small firms. Italy has already promised to let businesses delay paying their taxes until sales get back to normal, a measure it has used in the past in regions hit by earthquakes. In Germany, politicians have been hinting they may loosen limits on debt spending.

The Trump administration has been discussing another round of tax cuts, but those are not currently under consideration as a way to minimize fallout from the virus. Some Democratic lawmakers, including Speaker Nancy Pelosi and Senator Chuck Schumer, have asked the administration to think about interest-free loans for small business and other targeted spending, but so far that has not gained any traction.

Whether fiscal policy can be more effective depends on how the economy reacts. For now, the best thing policymakers can do is stem the flow of infection with an effective public health response, economists say. But if that fails, fiscal policy could be more adept at targeting assistance to the places that need it — helping vulnerable businesses by issuing low-cost loans or other types of financing or directing funds to communities struggling in the wake of the virus.

President Trump on Friday played down the economic fallout but suggested it was up to the Fed to help.