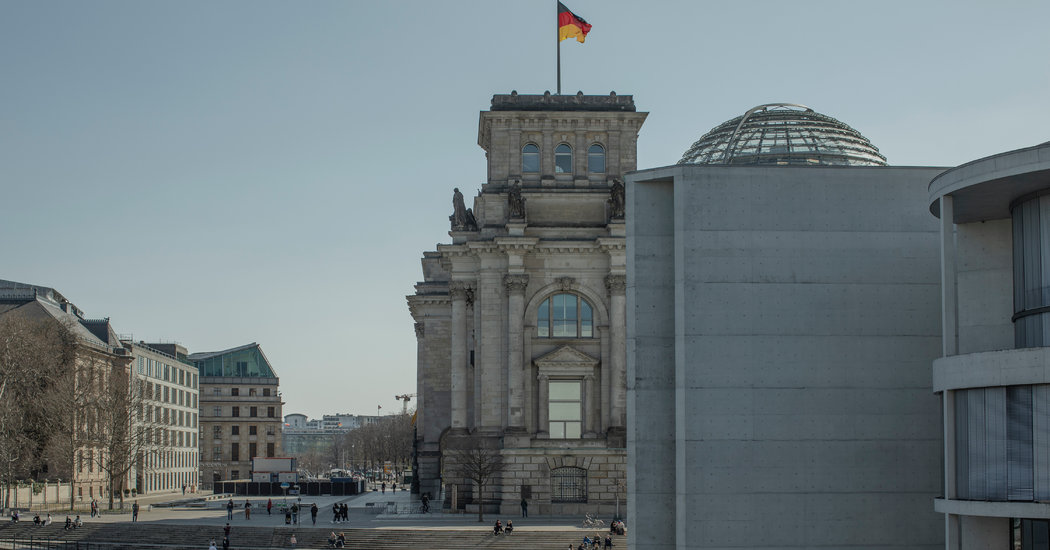 PARIS — Cavernous factories devoid of workers. Cranes frozen in midair over construction sites. Millions of people confined to their homes, spending a fraction of what they used to before the coronavirus hit.

Europe’s pandemic-induced lockdowns were widely expected to throw the continent into a deep recession. On Wednesday, Germany and France, the largest economies, showed just how bad it’s about to get, warning that they were headed toward their sharpest downturns since World War II.

France officially slid into a recession after suffering one of the worst quarterly contractions in more than 50 years. Growth tumbled an estimated 6 percent from January to April, from the fourth quarter, when the economy shrank slightly because of nationwide strikes, the central bank said. For every two weeks the population remains under confinement, the economy shrinks by at least 1.5 percent, it added.

And Germany is sliding toward its deepest recession on record, with growth expected to plunge almost 10 percent from April through June, five leading economic institutes said Tuesday.

Together, the reports underscored how quickly the situation is snowballing, putting pressure on governments as they scramble to calculate timetables for reopening their economies and weigh billions more in fiscal support to blunt the damage — beyond trillions already pledged in recent weeks.

“The worst growth that France has seen since 1945 was after the great financial crisis of 2008,” the French finance minister, Bruno Le Maire, told the Senate earlier this week. “We will probably go far beyond that.” President Emmanuel Macron was expected to announce in a televised address Thursday night that France would remain under lockdown beyond an April 15 deadline.

In Italy, where a lockdown has been in place for more than a month as the country logs one of Europe’s highest death tolls from the virus, the economy will shrink 9.6 percent in the second quarter, according to forecasts by economists at the Dutch bank ING. Spain, one of the hardest-hit countries, will see its economy decline by 8.9 percent in the same period, ING said.

Countries are trying to balance public health with concerns that a prolonged, deep recession may prove more costly than keeping their economies frozen to stem the spread of the virus. Economists expect countries to rebound slowly whenever their shutdowns end. Austria and Denmark are already planning exit strategies to reopen businesses and lift quarantines in small waves.

Yet if Germany, the biggest economy, is a marker, any rebound later this year will not be enough to compensate for a dismal first half. For the full year, the German economy will have shrunk 4.2 percent, the German institutes predicted.

In the eurozone, the group of 19 European Union nations that share the same currency, analysts expect a recession and a contraction of around 13 percent this year. By contrast, in 2009, the worst financial crisis year for the bloc, the economy shrank 4.5 percent.

The economic damage from the coronavirus has been faster, deeper and spread across nearly every economic sector. With nonessential workers ordered to stay indoors, construction activity in France plunged by 75 percent, while industrial activity shrank by half during the first quarter.

French restaurants, hotels, transportation and wholesalers saw business slump by two-thirds, exacerbated by a sharp drop in tourism. With people confined to their homes, consumer spending dropped by a third in the first quarter, while the use of credit and debit cards, a measure of consumer activity, sank by half after France’s quarantine was put in place a month ago.

The scale of the shock is similar across Europe, according to a report by the Organization for Economic Cooperation and Development released Wednesday. A composite of leading indicators that shows turns in economic cycles fell to the lowest on record, reflecting the economic impact of the lockdowns.

In Germany, joblessness will rise, the German institutes said, but the increase will be relatively modest because of a so-called short-work program that allows companies to furlough workers or reduce their hours rather than letting them go. The government pays about two-thirds of the lost wages.

One in four workers has been put on paid furlough in France, part of a support program worth 45 billion euros that the government has unleashed to try to prevent mass joblessness and the widespread collapse of the small and medium-size businesses that make up the backbone of the economy.

Germany had a budget surplus before the crisis began and can afford to support businesses with cheap loans and other aid during nationwide restrictions that have forced most nonessential businesses to close.

“Germany is in a good position to cope with the economic slump,” Timo Wollmershäuser, head of forecasts at the ifo Institute in Munich, said in a statement. Ifo was one of the five institutes preparing the forecasts for the government.

But other European governments are not so flush. Italy and Spain, both hard hit by the virus, will struggle to provide financial support to people and businesses. They and virtually all European countries are also likely to suffer severe economic slowdowns.

A growing number of officials and analysts believe the European Union needs an enormous financial response on a scale that will confront the calamity. Short of that, they warn, the bloc risks a larger financial, economic and potentially social disaster.

But European finance ministers ended a marathon overnight teleconference Wednesday without reaching an agreement on measures to counter the economic effects of the pandemic, including proposals to aid financially weak countries.

The measures, which would be on top of policies adopted by individual countries to aid their own economies, consist of a three-part package worth about a half-trillion euros, including 240 billion euros in emergency loans from the eurozone’s standing bailout fund, credit guarantees from the European Investment Bank to keep companies from collapsing and support for short-work schemes that help companies avoid layoffs.

Germany, the Netherlands and some other European Union countries are insisting that aid come with restrictions on government spending and other conditions that are politically unacceptable in Italy and Spain, where residents object to northern countries telling them what to do.