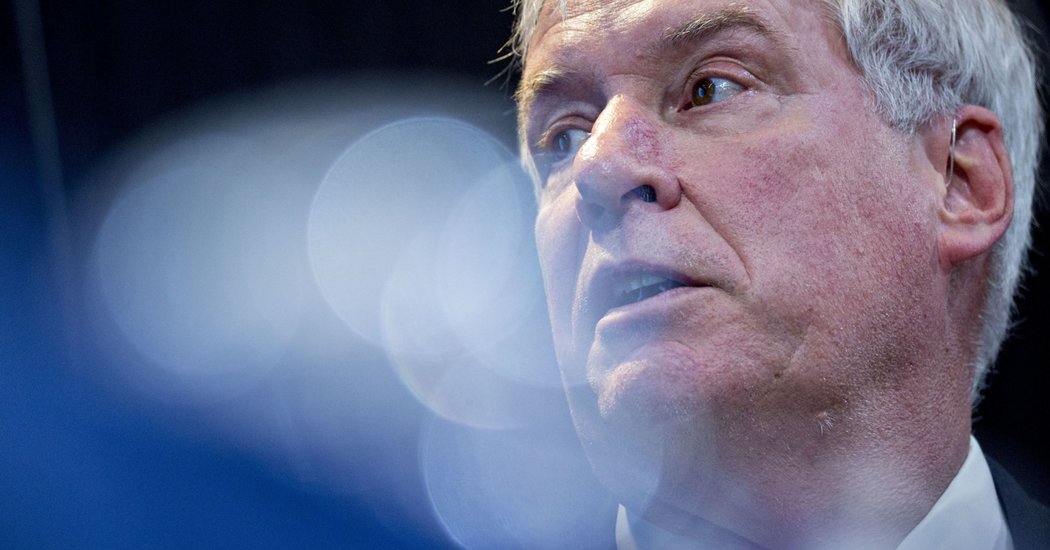 The Federal Reserve may need to buy assets other than government bonds to counter the next downturn, a Fed official said Friday, a dramatic suggestion meant to bolster the central bank’s increasingly depleted tool kit for fighting a downturn.

In coming years, “vision and boldness will be needed by all policymakers if we have to consider how policy should react to any large, adverse shock to the economy,” Federal Reserve Bank of Boston President Eric Rosengren told a room full of monetary policymakers and economists in New York.

He spoke as rates on the closely-watched 10-year Treasury bond dropped well below 1 percent on Friday, hitting lows never before seen in the United States. Investors are fleeing to the safety of government bonds as the coronavirus spreads and threatens global growth.

Stocks also continued to fall on Friday, with the S&P 500 tumbling more than 2.5 percent. The sell-off comes just days after the Fed slashed interest rates by a half point, an emergency measure aimed at helping to protect the economy against the growing risks from coronavirus.

Slumping longer-term interest rates leave the Fed with dangerously little room to stimulate the economy should things worsen. Their primary tool, the federal funds rate, lowers short-term rates and is already very low. Their backup measures, like mass bond-buying, work to push down longer-term rates. As those fall to rock-bottom, the Fed has little room to maneuver.

Mr. Rosengren said that if the Fed cuts its policy interest rate to near-zero, it is possible that the 10-year Treasury rate would follow.

“Such a situation would raise challenges policymakers did not face even during the Great Recession,” he said. And in such a case, “we should allow the central bank to purchase a broader range of securities or assets.”

“Such a policy,” he noted, “would require a change in the Federal Reserve Act.”

Mr. Rosengren did not specify which type of assets he thinks the Fed might need to ultimately add to its portfolio.

While central banks in other nations can buy equities and corporate bonds, the Fed is legally limited to government-backed debt. In the 2007 to 2009 recession and its aftermath, it interpreted that to mean Treasury securities and certain mortgage-backed securities.

Buying other asset classes would require opening the piece of legislation that empowers the Fed, as Mr. Rosengren noted. Central bankers have long been loathe to suggest such a move, out of fear that it will make the Fed a political football, risking its prized independence from partisan fighting.

Mr. Rosengren also suggested that the Fed should strike an “explicit agreement with the U.S. Treasury Department” to protect the central bank against losses if it were to buy a broader range of securities or assets.

There may be other types of debt that the Fed can already legally purchase but has yet to buy. Chair Jerome H. Powell has been urged by Representative Rashida Tlaib, the Michigan Democrat, to consider buying municipal debt, for instance. Mr. Powell generally brushes off such suggestions.

“I think a series of FOMC’s and Fed chairs in all kinds of different political environments have thought of that as something that’s not appropriate really for us in the sense that it’s government finance,” Mr. Powell said during testimony on Feb. 11.

Mr. Rosengren’s suggestion goes even further. As president of one of the Fed’s 12 bank branches, he has only a rotating vote on monetary policy, but he is a respected economist whose ideas carry weight with his colleagues. His ideas are likely to fuel discussion.

“I think everything is on the table here,” James Bullard, St. Louis Federal Reserve President, said earlier in the day on Friday. He was speaking on Bloomberg Television and had been asked about using the balance sheet in new ways.

But Mr. Bullard added that “it isn’t my base case at this point. My base case is this is a public health issue.”