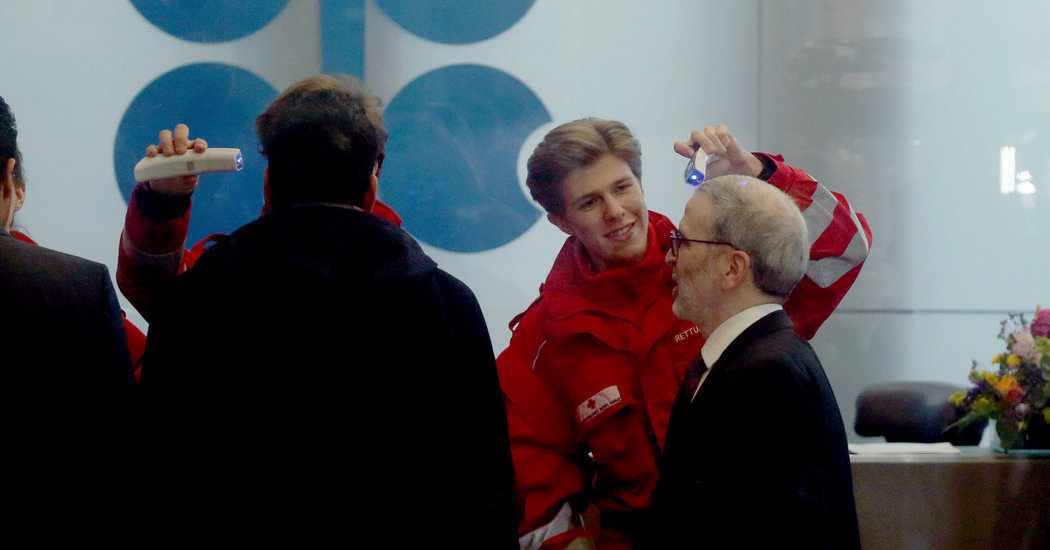 Oil prices plummeted on Friday after major producers failed to reach an agreement to reduce production, as concerns about coronavirus’s impact on the economy spread across the globe.

The meeting was supposed to reflect Saudi Arabia’s deft management of an oversupply of oil on world markets. But Russia’s unwillingness to go along with a take-it-or-leave-it offer threatens to unleash a gusher of oil on world markets — good news in the short term for consumers, with severe financial costs for the industry.

The Organization of the Petroleum Exporting Countries and other producers, including Russia, were trying to steady prices by reducing output beyond cuts that were already approved. But the oil powers struggled to reach an agreement during the meetings, which were in their third day on Friday.

For OPEC, that creates the risk of additional oil in an already oversupplied market.

The lack of a deal could also signal the end of the three-year alliance between Saudi Arabia, OPEC’s de facto leader, and Russia, which has helped prop up prices.

In the meeting, the Saudis appeared to gamble that they could strong-arm Russia, and lost spectacularly.

On Thursday, the OPEC countries put Russia on the spot by proposing to further reduce output by 1.5 million barrels a day, or about 1.5 percent of world supply. Moscow has been reluctant to go along with Saudi initiatives for new cuts.

The move only seemed to increase the resistance of Russia’s president, Vladimir V. Putin.

“We have just witnessed the perils of backing Putin into a corner,” said Helima Croft, analyst at RBC Capital Markets, an investment bank.

Russian officials have said that more time was needed to evaluate the impact of the epidemic. Russia’s petroleum industry, also, is dominated by publicly traded companies that are reluctant to trim back production. Still, why Moscow would want prices to fall is something of a mystery.

“Russia may believe that the downturn will only be temporary,” Ms. Croft said, “but it has seemingly risked torching” the alliance with OPEC on that assumption.

On the Saudi side, there was frustration with Russia’s foot-dragging and relatively slim contributions to cuts. Since the alliance was formed, the Saudis have absorbed the bulk of the cuts.

The sudden drop in demand for oil caused by the coronavirus epidemic — as factories shut down, people drive less and airlines cancel flights — seems to have brought the alliance to a “moment of reckoning,” said Bhushan Bahree, a senior director IHS Markit, a research firm.

For traders, the tensions bring back memories of an OPEC meeting in late 2014 when the Saudis, unable to persuade Russia to sign on to cuts, temporarily threw in the towel on managing the market. Prices wound up falling below $30 a barrel.

The price for Brent crude has now fallen around 30 percent this year. This plunge will have a wide range of implications, including lower earnings for oil companies, whose financial performance is closely tied to oil prices. The share price of Exxon Mobil was down about 3.5 percent on Friday.

Lower prices are also likely to slow the economies the countries around the world that rely on oil revenue to finance their governments, from Algeria and Iraq to Russia and Kazakhstan. There will be less money for social programs, risking political unrest. A price drop will cut into the profits of Saudi Aramco, the Saudi national oil company which was listed on the Riyadh stock exchange last year.

Late last year, an increase in gasoline prices by the strapped Iranian government set off a wave of protests that were brutally suppressed by the security forces, who killed scores of demonstrators and detained thousands.

For the American economy, lower prices will be a mixed blessing. Consumers are likely to benefit from lower prices for gasoline and other oil products, but shale oil producers in the United States may slow investment in drilling and lay off workers.

Scott Sheffield, chief executive of Pioneer Natural Resources, one of the biggest Texas oil producers, said there was no immediate impact yet on production activities in the Permian basin, the biggest shale field.

But, he added, “I have not seen any reasons why Russia would not agree except to put U.S. shale under. U.S. production will turn down now and help OPEC.”

“We are extremely oversupplied with crude in the world,” said Samah Ahmed, an analyst at Kpler, a firm that tracks petroleum flows.