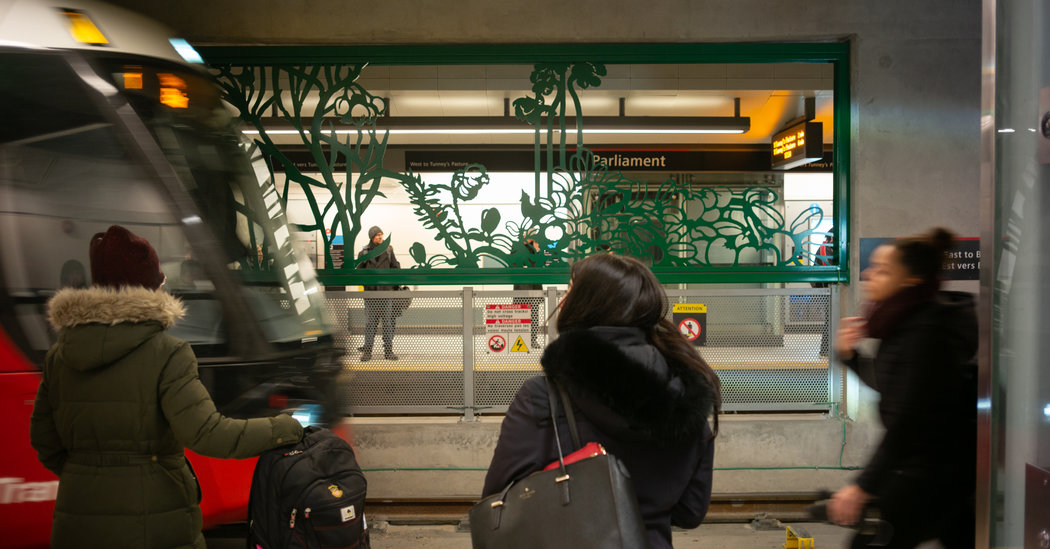 While Ottawa may be the national capital, the goings-on up on Parliament Hill aren’t what get most people here worked up these days. Instead, it’s the city’s new light-rail system.

On what is formally known as the Confederation Line of the O Train, the series of problems that have plagued service since its opening in September have led many to call it the “Oh, Oh Train.” The trouble began with the opening date itself. Originally the trains were scheduled to roll in 2017.

But almost from opening day, a slew of problems appeared. Somehow, passengers holding doors open — a not approved but common practice found on nearly every transit system — crippled trains. Parts of trains, including a door, fell off, leading to other disruptions. The system used by the trains, made by the French-owned company Alstom, to pull electricity from overhead wires sometimes creates terrifyingly loud and bright electrical arcs before shutting down. Long sections of that wiring have also collapsed. Train control system and computer failures have brought traffic to a halt. The steel wheels on cars developed flat spots, forcing their removal from service. Switches froze when winter came.

The result of all of this is that only 13 trains are in service most of the time, rather than the promised 15. Some days it’s much worse. Last week only six trains were running during one rush-hour period; some rush hours have had no service.

Five months on, the problems and disruption seem to keep on coming.

Aside from dealing with uncertainty, passengers have found themselves stuck on overcrowded platforms. A fleet of buses has been put on standby, and buses have been pulled from other routes to rescue rail users while stranding other bus users.

Construction delays and break-in problems, if perhaps of shorter duration, are common to big transit projects. But the situation in Ottawa may provide a lesson for cities about how not to go about building them.

Throughout the opening delays and the seemingly cursed operation of the new line, increasingly frustrated local politicians have often found themselves in the dark about what was going on. And that, one expert told me, is directly related to a decision made in 2012 to create the 2 billion Canadian dollar project through something called a public-private partnership, which public servants and bankers usually call a 3P or P3.

Historically, the city would have raised the money to build the system, then hired companies to design and build it. Whatever emerged would be maintained by city.

But the design, building and construction and construction financing of Ottawa’s system was turned over to a specially created company owned by ACS Infrastructure, a Spanish engineering company; Ellis-Don, a construction company based in Mississauga, Ontario; and SNC-Lavalin, the Montreal-based engineering company that was the talk of Ottawa for other reasons this time last year. Those three companies also received a second contract from the city to maintain the system for the next 30 years.

Matti Siemiatycki, the director of the School of Cities at the University of Toronto who has long studied 3Ps, told me that Ottawa’s mess was being widely followed.

“It really starts to raise questions about whether public-private partnerships are a model that’s going to persist, to continue to deliver these big projects,” he said.

Projects built through this system, Professor Siemiatycki told me, generally cost more. But the theory is that if private sector companies effectively “own” projects, they will be driven to build them on time and on budget and ensure that they work properly.

The process has been used throughout Ontario and in other provinces, particularly British Columbia, to build hospitals, courthouses and schools, and the federal government under Stephen Harper set up a public-private partnership fund. For the most part, Professor Siemiatycki said, it has generally worked well.

But Professor Siemiatycki also said that failure of the private vendors to quickly resolve the problems in Ottawa is puzzling particularly given that the city has refused to pay the consortium millions of dollars in monthly maintenance fees and that the city is attempting to bill the consortium for the cost of things like the parallel bus service — factors that, according to theory, should prompt swift action.

SNC-Lavalin, ACS and Ellis-Don are also among the members of a different public-private partnership building an extensive light rail line in Toronto. Last month that project announced a major delay in opening.

Ottawa, Professor Siemiatycki said, is also demonstrating another drawback of many public-private deals: secrecy. Confidentiality clauses in contracts meant that as the opening was repeatedly delayed, the contractors’ consortium stayed largely silent. More recently, its maintenance company has offered some public comments, but it is hardly a model of transparency. The municipal transit service has been left to do the talking.

“One of the concerns has been that these contracts can be used as a shield against public disclosure and public information about projects, and that can really shake the legitimacy of these big infrastructure projects,” he said.

I should note that in my experience the train is quiet, smooth and fast. But because I commute down to a home office, I’m an irregular user and thus isolated from its problems.

What can other cities in Canada and elsewhere learn from Ottawa’s trains of frustration?

A native of Windsor, Ontario, Ian Austen was educated in Toronto, lives in Ottawa and has reported about Canada for The New York Times for the past 16 years. Follow him on Twitter at @ianrausten.

How are we doing?

We’re eager to have your thoughts about this newsletter and events in Canada in general. Please send them to nytcanada@nytimes.com.

Forward it to your friends, and let them know they can sign up here.