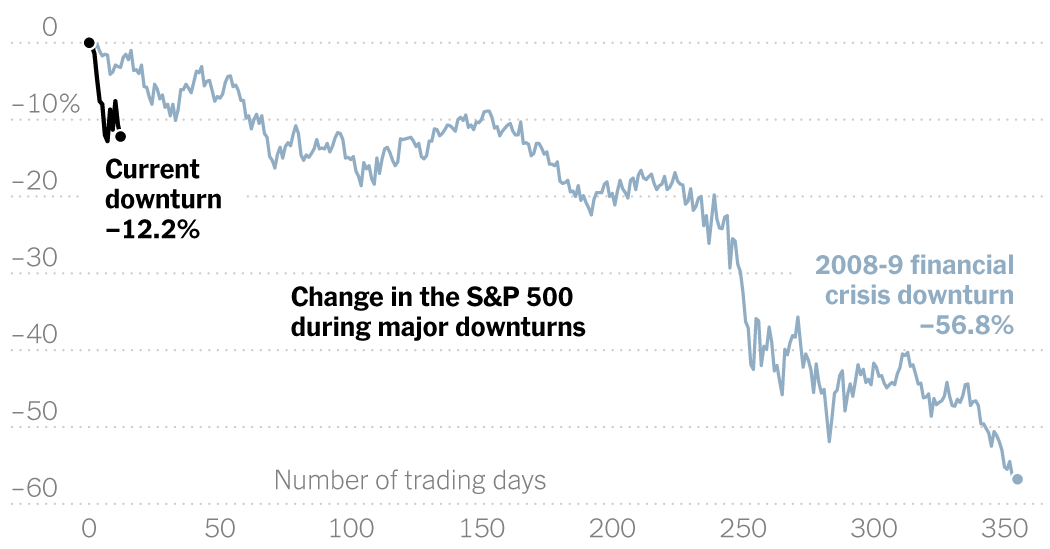 There is nothing investors hate more than uncertainty. Right now, that is all there is.

The spiraling fears have caused financial carnage. The S&P 500 index has dropped 12 percent since Feb. 19, the sharpest dive in nine years. The plunge has obliterated roughly $3 trillion in wealth.

In the past two weeks, even decent days have been tinted with a scary aura. On Friday afternoon, the S&P was poised to lose more than 2 percent, before the index pared its losses amid a blizzard of buying in the moments before the closing bell. (A similar last-minute surge the previous Friday made an awful week a little less bad.) For all the heartburn-inducing turmoil, the S&P ended this week essentially flat.

Market records have been falling like dominoes. The Dow Jones industrial average, for example, had both its biggest single-day point decline (1,191 on Feb. 27) and its biggest gain (1,294 on Monday).

Behind the turbulence are confusion and anxiety, and a sense that the modern world is in an unprecedented situation. “There’s no playbook for this,” said Derek Devens, a portfolio manager at the fund company Neuberger Berman. “That’s been really hard for people to digest.”

The financial mayhem extends beyond the stock market.

Many companies are essentially frozen in place, unable to predict how the coronavirus might affect their businesses. Their immediate task is to figure out how to keep operating while making sure their employees are safe. In Silicon Valley, Apple and Twitter told people to work from home. In New York, Bank of America and JPMorgan Chase dispatched small parts of their trading desks to the suburbs so they would have backup crews to keep business running in an emergency.

With the global economy now poised to shrink, demand for oil is declining, causing the price of crude to crater. As investors flee from risk, gold prices have soared. The safest assets out there — bonds issued by the U.S. government — have shot higher in price. For the first time, the interest rates on 10-year Treasury note shriveled this week to less than 1 percent, falling on Friday to a record low of 0.71 percent.

A sudden global disease outbreak isn’t the kind of risk that many market players were trained to react to. Few investors are epidemiologists. The most sophisticated financial models and the fastest-moving trading algorithms are flying blind.

“This you can’t even put a model on, because it’s not really something that we’ve seen before,” said Michael Feroli, the chief U.S. economist at JPMorgan.

In financial circles, there’s a term for such events: a black swan. They are rare but ominous. And they are impossible to anticipate.

The Sept. 11, 2001, terrorist attacks were a calamitous example, a so-called exogenous shock for markets, having originated outside the financial system itself. More often, market turmoil comes from within: the mortgage crisis and collapse of Lehman Brothers in 2008; tremors in the junk bond market in 1987 and 1989; and the demise of the giant Long-Term Capital Management hedge fund in 1998.

In 2001, no one knew if the attacks on the World Trade Center and the Pentagon were merely the first in a series of strikes. With the spread of the coronavirus, no one knows how deadly and widespread it will prove to be, or how disruptive to people’s lives, or its impact on the domestic and global economy.

“Investors went from thinking everything was flawless to hopeless,” said Howard Marks, a co-chairman of the alternative asset manager Oaktree Capital Management. “People are thinking, ‘I’ll be stepping over bodies on Park Avenue, like the Black Plague.’ That’s panic.”

Fears can be self-fulfilling. On Thursday, the venture capital firm Sequoia Capital directed the young tech companies in which it has invested to “question every assumption about your business” and consider taking pre-emptive action to prepare for a downturn, such as curtailing spending and taking a hard look at the size of their workforces. Sequoia called the coronavirus “the black swan of 2020.”

In some respects, exogenous shocks sow even more fear and uncertainty than traditional financial crises, because investors have no experience to draw on. Monetary policy, and the central banks that wield it, can be effective at battling financial upheavals, as the Federal Reserve managed to do during the 2008 crisis, but it has no effect on viruses.

What is especially unnerving to investors now is the apparent impotence of institutions that would seem to have the greatest chances of soothing markets.

When the Fed announced an emergency decision on Tuesday to slash benchmark interest rates by half a percentage point, stock markets rallied for about 15 minutes before resuming their downward spiral.

One reason: Investors feared that the Fed — whose monetary policy has been a key to the stock market’s long rally — is running out of options to stimulate the economy. Eric Rosengren, the president of the Federal Reserve Bank of Boston, said Friday that the central bank might need to weigh new measures to counter a downturn, including buying a wider array of assets.

The reality is that nobody knows quite how to calm markets, much less how to contain the virus outbreak. Modest bits of upbeat news — the Labor Department announced on Friday morning that the American economy had added 273,000 jobs in February — haven’t done the trick.

“Today you had this great jobs report,” said Jay Foreman, the chief executive of the toy company Basic Fun. “It’s going to be exactly the opposite next month. I can’t imagine anybody is hiring anybody this month, unless they’re selling hand sanitizer.”

He said the coronavirus crisis was forcing him to lay off 18 of the company’s 175 workers — 10 in the United States, six in Hong Kong and two in Europe.

Nor were investors soothed by President Trump’s signing of a bill to provide $8.3 billion to fight the coronavirus or cheerful TV assurances from Larry Kudlow, the top White House economic adviser.

“There really isn’t a response from the administration or the authorities telling people to calm down and there’s a plan,” said Gennadiy Goldberg, a strategist at TD Securities in New York. “It certainly feels like there isn’t a plan, and I feel like that’s what the market’s reacting to.”

That is a recipe for more wild days in the weeks ahead. In certain Wall Street drugstores, antacid might be in as much demand as hand sanitizer.

“When there’s unprecedented uncertainty, which is what we’re dealing with, we could have elevated volatility for quite some time,” said Julian Emanuel, a strategist at the brokerage firm BTIG.

He noted that Mondays are often days of particular turbulence because investors have spent a couple of days stewing over events. “What you see in markets, very often these things turn on a weekend,” he said.

However intense, panics don’t last forever. When markets reopened after the Sept. 11 attacks, the Dow dropped more than 14 percent in a week. It turned out to be a buying opportunity; within a month, stocks had recouped their losses.

“There will come a day when we reach a bottom,” said Mr. Marks, the Oaktree co-chairman. “We have no idea when or where that bottom will be. But all great investments begin with discomfort. You make the big money buying things no one else will buy.”