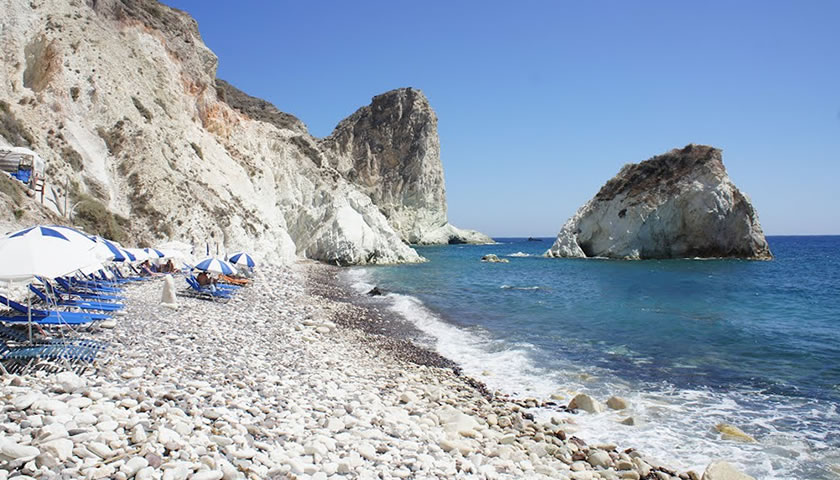 Find Santorinitours.org at Emporio 847 03, call us on 694 457 7918 and book a tour from Santorini tours.  Read our article in order to see the most famous beaches of Santorini. For most, a crystal clear sea, like the Greek ones, is enough to enjoy the summer, swimming and the water. But in Santorini, the so special island with its volcanic terrain, the beaches are not a simple affair.

They are all so unique, with the natural scenery turning them into attractions themselves, especially for those with geological interests or admire the majesty of nature in all its expressions.

We have gathered here beaches in Santorini that are worth visiting at any time of the year, even if you don’t feel like swimming. They are each different, but they all have one very important element in common: The volcano is the factor that determined both their creation from the beginning, as well as their subsequent evolution, up to the form in which they are seen and admired by visitors today.

The Red Beach of Santorini is famous all over the world, the most popular among the beaches of the island, a real attraction of the special nature of this place.

It is located in the south-eastern part of Santorini, in the wider area of ​​Akrotiri, at a distance of about 8 kilometers from Fira. Red, impressive rocks that form steep cliffs, red sand and a sea of ​​deep blue, which also reflects that bright red.

A truly alien landscape from what scientists have perhaps only encountered on Mars, the “Red Planet” – again, without of course the wonderful sea!

The White Beach is the most different of all the beaches of Santorini: The very different element is exactly what gave it its name: its white color, which contrasts with the dark, reddish or ocher shades that are found on the other coasts of the island.

It is located in the south-eastern part of the island, in the wider area of ​​Akrotiri, 14 kilometers south of Fira and very close to the well-known and impressive Red Beach.

To reach it, one needs to either board one of the boats that make the journey either from the port of Akrotiri or from the neighboring Red Beach, or of course rent one’s own boat.

Towering rocks, sculpted in such a way that whoever faces them cannot believe that they are a creation of nature and not of humans, endless deep blue sea and fine black sand. This is the scene at Vlychada beach in Santorini, one of the most impressive on the island.

It is located at the southeast end, immediately after Agios Georgios, Exomytis and Perivolos, near Megalochori and Emporio and at a distance of 13 kilometers from Fira.

It is a very long beach, organized only at the beginning and is never crowded. There will always be a quiet corner available for those looking for peace and quiet to enjoy a day at sea, while at the end of the shore nudism is common.

The beach in Perissa of Santorini is one of the busiest beaches of the island. It is located on the southeast coast, right in front of the settlement of the same name and features fine black sand and usually calm, clear blue waters.

The beach starts from Mesa Vounos, the impressive rock that rises on the coast and essentially separates it from Kamari. It is fully organized and gathers both groups of young people and families with small children.

Umbrellas and sunbeds are available along its entire length, but there are also free spots where someone can place their towel if they prefer. Restaurants, cafes, shops are located on the beach and offer bathers everything they ask for.

Very close to the coast is the most important Byzantine monument of Santorini, the early Christian basilica of Agia Irini, from which it is assumed that the whole island got its name Santorini (Santa Irini in Latin means Agia Irini).

The beach in Kamari is one of the most popular in Santorini. It stretches for about 5 kilometers, in front of the settlement of the same name on the east coast of the island and together with the beach of Perissa gathers the most people every summer.

It has fine black sand (it is often called the Black Beach, as opposed to the Red and the White) and pebbles in some parts of it. From the beach begins the very special hiking route to the top of Mesa Vounos, where the archaeological site of Ancient Thera is located.