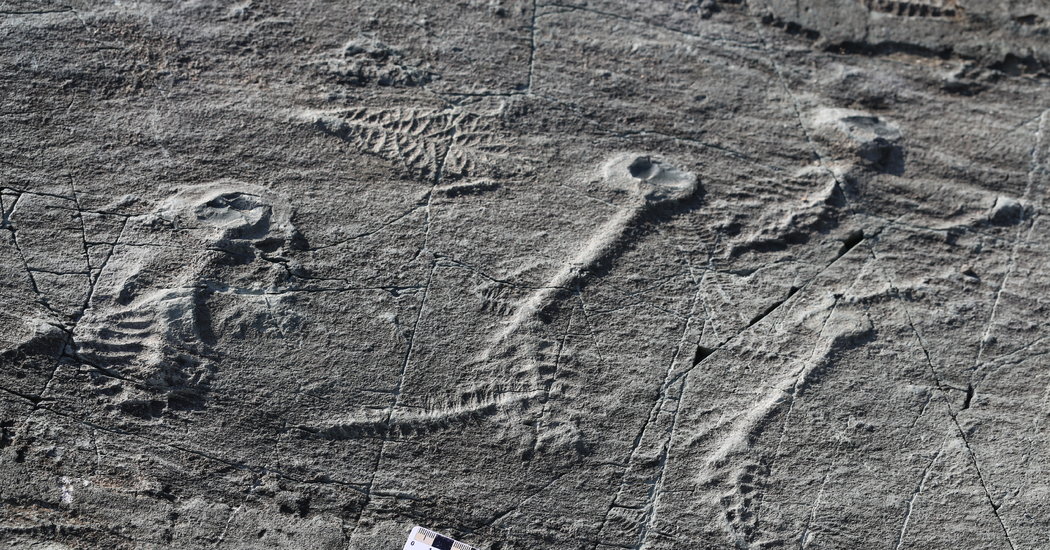 More than half a billion years ago, peculiar beings called rangeomorphs ruled the seas. They looked like modern ferns, with leaflike protrusions that branched off in a fractal pattern. Some stood over three feet tall, while others lay flat.

Scientists don’t know why rangeomorphs emerged 571 million years ago — before the Cambrian explosion filled Earth’s oceans with more familiar creatures, and when nearly all of their fellow organisms were microscopic — or how they ate or reproduced. We also don’t know how they fit into evolutionary history. There are “many strange questions about them,” said Alex Liu, a paleobiologist at the University of Cambridge who has been studying the frondy oddballs for 13 years.

New research by Dr. Liu and Frankie Dunn of the Oxford University Museum of Natural History adds another surprise: Although rangeomorphs were thought to have lived on their own, many were actually connected by long, thin filaments, forming large networks.

The authors hope that this discovery, published Thursday in Current Biology, will help shed light on some of those other mysteries.

The fossil record is full of rangeomorphs; they are stamped into shale and sandstone from England’s Charnwood Forest to Australia’s Flinders Ranges.

In 2015, Emily Mitchell, a paleoecologist at Cambridge, along with Dr. Liu and other researchers, analyzed hundreds of digitized specimens of a flat rangeomorph species called Fractofusus, all from Newfoundland, Canada. Fractofusus lived in groups, and through statistical analysis the researchers found that they were often laid out in “this clustered pattern,” Dr. Liu said:

Based on this arrangement, the researchers posited that Fractofusus might have reproduced by sending out stolons, or runners: filaments that grow a certain distance from the parent organism and then bud new life. Many living things, including strawberries, orchids and some jellyfish cousins called hydrozoans, propagate this way today.

If rangeomorphs had stolons too, perhaps they left a trace. Dr. Liu had already noticed some distinct, thin linear impressions close to rangeomorph fossils he had been working with. “Once we realized they were there, we started looking out for them,” he said.

After a few years, they had found thousands more examples in Newfoundland, including a handful in which the filaments connected two rangeomorphs to one another. Through further analysis, the team found that the filaments tended to emanate from the bases of the rangeomorphs. The biggest filaments were about 12 feet long — “quite a lot larger than anything we were expecting,” Dr. Liu said, and dwarfing any of the filamentous bacteria and algae that lived alongside the rangeomorphs.

They could be dense, too; in one bedding plane, there were hundreds of filaments per square meter.

“Stolons are really thin, and unlikely to be preserved,” Dr. Mitchell said. She added that she was “shocked and delighted” when Dr. Liu and Dr. Dunn found something that resembled them.

It isn’t clear that these filaments were actually used for reproduction — or, indeed, exactly what they did, said Lidya Tarhan, an assistant professor of geology and geophysics at Yale University who was not involved with the study. But “the association is certainly highly suggestive,” she said.

Another possibility, Dr. Liu said, is that the filaments served as channels for nutrients, or chemical signals: “a means to communicate between the organisms,” the way trees do via associated fungi. Or they might have helped to keep the rangeomorph community stable while buffeted by ocean currents.

Further research in Dr. Liu’s lab could shed light on larger questions, such as where rangeomorphs fit into the puzzle of animal evolution, and “how organisms got big in the first place,” he said. They were even bigger than scientists thought: “To suddenly realize that these are interconnected communities is quite bizarre.”