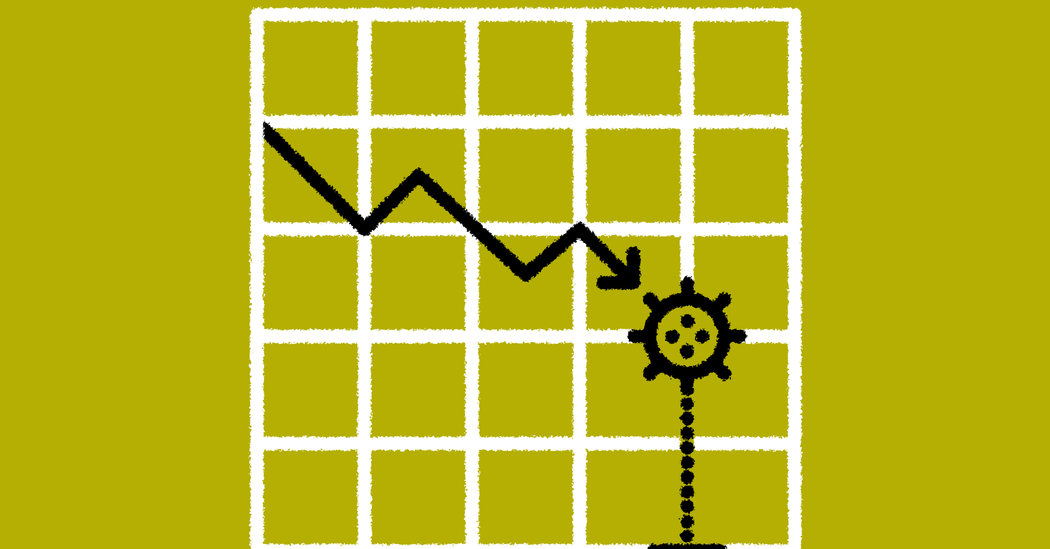 I’m going to do my taxes this week. There, I said it. Maybe now I’ll actually follow through. Or I’ll spend the week wandering from supermarket to supermarket, stocking up on canned soup. The coronavirus has been rattling the business world since January, but this week was different: It sent the markets tumbling and now seems poised to disrupt every aspect of American life. Maybe we’ll all end up doing our taxes from the safety of a bunker. — David Yaffe-Bellany

As cases of the coronavirus spread around the globe, stock markets entered a seven-day meltdown, with analysts issuing new warnings that the outbreak could drag down economies around the globe. The market losses last week were the largest since the financial crisis in October 2008, even as the Federal Reserve sought to assure investors on Friday that the American economy remained strong. For some companies, however, the apocalypse has been good for business: Investors are betting that people will load up on Clorox wipes and Campbell’s soups.

A New Bob at Disney

After delaying his retirement several times, Bob Iger abruptly stepped down as chief executive of Disney on Tuesday. (No, he’s not running for president: “It’s a little late for that,” he said.) He will be replaced by Bob Chapek, or Bob C, as he’s known in the halls of Disney. But the shared given name is where the similarities end. Mr. Iger is a larger-than-life personality who had a successful career in television before he became chief executive in 2005. Mr. Chapek is a quiet and efficient operator with almost no experience in television. He has spent most of his nearly three decades at Disney working in less flashy businesses like consumer products.

Harvey Weinstein was found guilty of two felony sex crimes on Monday after a trial in Manhattan that has gripped the country for weeks. Mr. Weinstein was acquitted of the most serious charges against him — being a sex predator — but women’s rights groups celebrated the conviction, hailing it as a major victory for the #MeToo movement. Still, for all the progress of the last few years, Hollywood remains a man’s world, dominated by male filmmakers, producers and writers.

Investors are concerned that the coronavirus could seriously rattle the U.S. economy in the coming weeks. But last month, its impact was relatively insignificant, with the worst of the outbreak confined to China and the surrounding countries. On Friday, the Labor Department is scheduled to announce how many jobs were added to the economy in February. Economists are expecting another solid month of hiring to continue the labor market’s record-setting run, which has seen the unemployment rate hover below 4 percent for a year. But they will also be watching for any signs that the supply chain disruptions caused by the virus last month have started to slow job growth.

If (like me) you plan to do your taxes this week, you may be interested to learn that the maker of TurboTax, the software company Intuit, is spending $7.1 billion to purchase Credit Karma, a consumer finance firm that also offers tax-prep services. (Is this the birth of Big Tax Prep?) The deal is aimed at creating a Silicon Valley financial technology company that can provide a wide range of financial services, from getting credit scores to filing taxes. But the acquisition could also attract the attention of regulators, who have become increasingly concerned about companies that control large amounts of consumer data.

Ordering dinner on Grubhub or Uber Eats is almost irresistibly convenient. But it may also drain profits from neighborhood eateries. For months, New York restaurant owners have butted heads with the online delivery services, complaining that the apps charge exorbitant commissions. (They’re also expensive for consumers: The markups on food delivery can go as high as 91 percent.) Now, the New York City Council is proposing regulations that would cap the commissions — which usually range from 15 to 30 percent — that the apps charge restaurants and require them to apply for licenses to do business in New York.

Supermarkets like Giant and Stop & Shop are putting cute smiley faces on robots to try to make people feel good about machines that are taking over a lot of human work. (What would Andrew Yang say?) After a decade of high-flying growth, many young tech start-ups are facing a reckoning, conducting waves of layoffs as the growth-at-any-cost era comes to an end. And a federal safety agency found that Tesla’s autopilot system was partly to blame for a 2018 crash in California in which the driver died.

Was this newsletter forwarded to you? Sign up here.