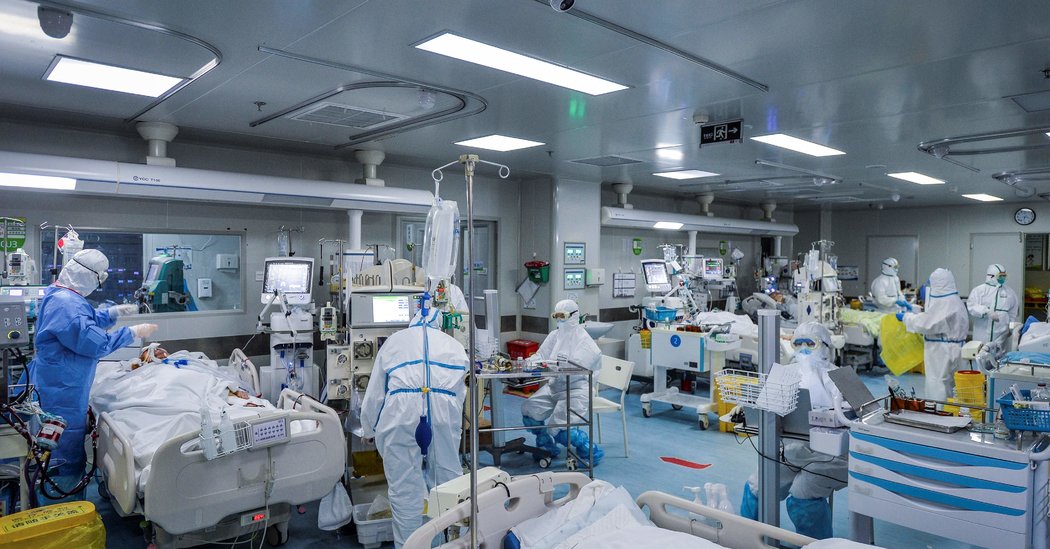 Good morning. (Want this in your inbox each morning? Sign up here.)

A stark warning shakes the economy

The World Health Organization said yesterday that coronavirus cases outside China were accelerating. Around 80,000 people in nearly 40 countries have been infected, and at least 2,600 have died.

Draconian measures in China have slowed the spread there, the W.H.O. noted, but the outbreak could prove hard to contain elsewhere. Most health experts are worried about Iran, Italy and South Korea. Japanese officials said today that the country, which has more than 800 confirmed cases, was at a “crossroads” in fighting the outbreak.

If other countries followed China’s “bold approach,” as the W.H.O. put it, widespread quarantines and other restrictions would hit the global economy hard. This fear was partially responsible for yesterday’s tumultuous markets, as investors hedged their portfolios, businesses revised their forecasts, and officials prepared for the worst.

What’s up, what’s down

Global stocks fell sharply yesterday, with the S&P 500 suffering its worst single decline in two years. In just one day, the benchmark index gave up all its gains for the year. Every major sector fell.

Until now, investors viewed the virus outbreak “like a minor traffic jam,” according to the economist Megan Greene: “Disruptive but, in economic and financial terms, something you get past quickly.” Indeed, a recent survey of fund managers by Bank of America found that those investors were holding their lowest cash balances since 2013.

No longer. Stock investors are starting to price in the risk of a potential pandemic. Bond investors have been worried for some time, pushing long-term yields to historic lows.

Bucking the trend, the usual havens like U.S. Treasuries, the dollar and gold performed well. And if you’re brave enough to trade things linked to the VIX volatility index, the sharp, sudden lurch in trading has been a winner.

Why are investors reacting now? Our colleague Matt Phillips shares his thoughts:

The coronavirus isn’t just a China story anymore. Expanding outbreaks in other countries have investors and analysts rethinking their knee-jerk calls that the economic impact of the virus would be transitory and largely limited to China and its Asian neighbors.

So far, economists have only snipped their expectations for the economic impact on the United States and the profits of American companies. But the sharp tumble in stocks — and more importantly bond yields — on Monday suggests investors are quickly moving beyond those relatively rosy views.

Of course, investors can be wrong. Markets often overshoot, ping-ponging between overly optimistic when times are good to downright despondent on the first sign that they might, well, not be. The truth is almost always somewhere in the murky middle, except when it isn’t.

U.S. stocks are set to open up slightly today, although European shares also started in the green before slipping into the red. Traders say they aren’t in “sell everything” mode — even if what passes for optimism these days are calls like those from Blackstone’s Byron Wien, who recently said, “I don’t think it’s the end of the world.”

Profit warnings from companies are piling up, as the outbreak’s impact on supply chains and consumer spending takes its toll.

United Airlines abandoned its earnings guidance for 2020, saying “the range of possible scenarios is too wide” to provide a sensible forecast. With some understatement, it said demand for flights to China was down “approximately 100 percent.”

Expectations for a Fed rate cut (or two) are rising, although central bank officials are reluctant to factor epidemiology into their forecasts for the U.S. economy. For their part, Goldman Sachs economists cut their estimate of first-quarter G.D.P. growth to just above 1 percent, saying the risks are “clearly skewed to the downside.”

Falling markets and weaker growth could be a threat to President Trump’s re-election chances, a source of consternation inside the White House. The president tweeted yesterday that the virus was under control in the U.S., and the drop in stocks meant the market was “starting to look very good to me!” The White House’s top economic adviser, Larry Kudlow, added that investors should “seriously consider buying these dips.”

A watershed moment for #MeToo

A Manhattan jury convicted Harvey Weinstein yesterday of two counts of two felony sex crimes but acquitted him of charges of being a sexual predator. No matter: It was a big moment in holding powerful men accountable in a court of law.

A reminder of how the case reshaped the corporate world, according to Rebecca Greenfield of Bloomberg:

As sex-harassment complaints spiked in the last two years and numerous prominent people were fired, companies also found new ways to protect themselves. Some merger agreements now include a “Weinstein Clause” in case misconduct emerges. Companies can even purchase a type of “disgrace insurance” against wayward executives.

The main selling point of private equity is that, despite hefty fees, it outperforms the stock market. Bain & Company’s latest report on the industry challenges this pitch.

U.S. buyout funds’ returns have essentially matched U.S. stock markets over the past 10 years. Returns over longer periods have been better for private equity, but investors may rightfully ask: What have you done for me lately? “Parity with public markets is not what PE investors are paying for,” Bain writes. (In light of these findings, the big annual industry confab that starts today in Berlin, known as SuperReturn, might not live up to its branding.)

• The sheer amount of uninvested capital — some $1.5 trillion in so-called dry powder — is driving up prices for deals, eroding funds’ performance.

• The only sure winners, the report predicts, are sector experts — think Silver Lake for tech or L Catterton for consumer — or mega-firms like Blackstone and KKR.

Cross Buffett off the list of potential Bloomberg L.P. buyers

On CNBC yesterday, Warren Buffett told Andrew he would “have no trouble voting for Mike Bloomberg,” though he cautioned that support from a fellow billionaire might not help Mr. Bloomberg win the Democratic presidential nomination.

CNBC’s Becky Quick: If Michael Bloomberg becomes the Democratic candidate, would you consider buying his company?

Mr. Buffett: No. (Laughs.) I can give you a categorical answer to that.

Ms. Quick: Because of the price, because of …?

We threw out some names of potential Bloomberg buyers, including Mr. Buffett, in the newsletter last week … but that was before Mr. Bloomberg’s debate debut.

Fun fact: Mr. Buffett has finally traded in his flip phone for an iPhone, a sign of brand allegiance (in addition, of course, to his company’s $74 billion stake in Apple).

• HP plans to counter Xerox’s hostile takeover bid with a plan to buy back $15 billion worth of stock. (WSJ)

• President Trump received a huge welcome in India. But that won’t get him any closer to a trade deal with New Delhi. (NYT)

• Senator Bernie Sanders outlined how he would pay for policy proposals like “Medicare for all.” Not everything adds up. (NYT)

• Britain’s post-Brexit dilemma: come up with its own rules without alienating its most important trading partner, the E.U. (NYT)

• A Cisco employee made nearly $100,000 trading on insider information about a pending takeover. Then he turned himself in to the S.E.C. (Bloomberg)

• The European Commission has told its staff to begin using the encrypted messaging platform Signal for all communications. (Politico)

• Netflix cracked open its viewership black box, with a new feature that will show users the top 10 movies and TV shows in their country. (Yahoo)

• The start-up reckoning is underway, as investor anxiety and cold financial reality settle in. (NYT)

• A harsh review by a former central bank chief of Thomas Piketty’s new book: “Look skeptically at its solutions.” (FT)